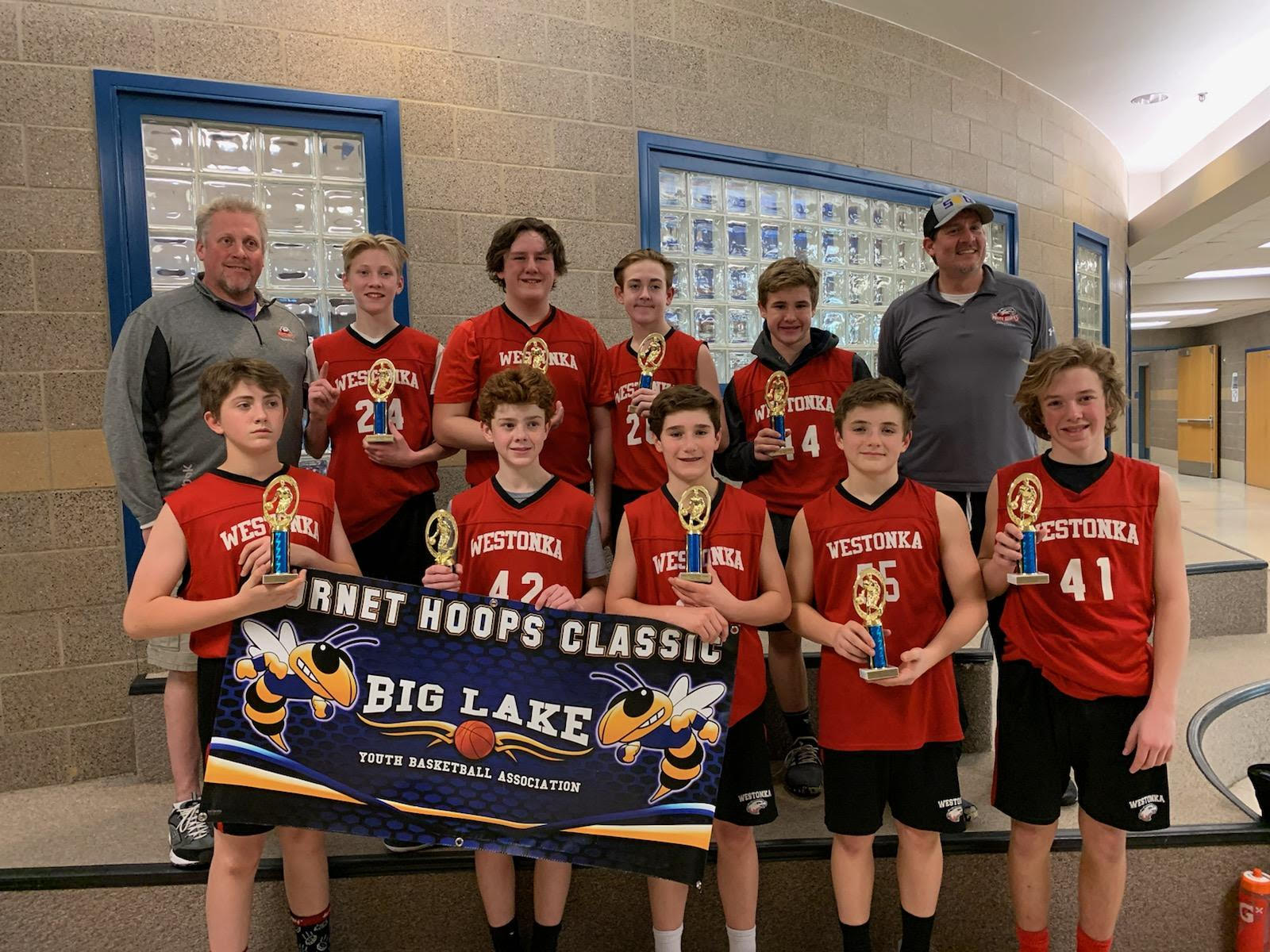 Making a Statement in Second Place

The Westonka 8th Grade Boys Black Team put things together in Big Lake on February 24th to capture 2nd Place.  Playing some very quality competition in all three opponents at the B-Level, Westonka displayed their best TEAM BASKETBALL of the season.  Coaches Mike Specht and Andy Courneya stated how proud they were of their players.  "We would put this team up against anyone with the athletic swarming defense performed during the tournament!"
In Game 1, Westonka put Bemidji into a 20 point deficit with a stifling defensive press.  The Captains each exploded on offense, and the final score of 57-49 is much closer than the actual game was.  Once the White Hawks turned off the press Bemidji was able to whittle down the lead.
Game number two pitted the White Hawks up against possibly their best opponent of the year in Alexandria.  They would be short-handed without their Head Coach and one of their Co-Captains.  This led to a very exciting back and forth game that was truly won through effort and team play.  Some key three points bombs in the second half, and a steal leading to an And-1 with .02 second left on the clock, secured a 41-39 victory.  This groups of 8th graders truly left everything on the floor in this one.
In the first place game, Westonka dug in during the first half against another strong opponent in Sartell.  After the 10 point run by Sartell in the second half, the White Hawks finally got beat after overall team exhaustion.  It was a hard fought and deserving Second Place finish for the Westonka White Hawks.  They will finish their season in Watertown on February 29th.  This team has grown as unit and should be considered a formidable opponent to whomever they may face.
Go White Hawks!
#53 Henry Zimmerman, #42 Miles Dumbauld, #21 Sam Gaylord, #55 Owen McCue, #41 Matt Nuemann, Coach Mike Specht, #24 Wyatt Specht, #3 Connor Espisito, #20 Jadon Courneya, #44 Carter Reinbold, Coach Andy Courneya

The 8th Grade Boys Black Team accomplished the expectations set upon them in Delano on January 25th.  This was their last C-Level Tournament of the season and anything less than first place would have been considered disappointing.

The games played came with some tough physicality that can sometimes be the case when playing at the lower levels.  Compensation for skills can at times be through playing with a lot of fouls.  At the end of the three games, Westonka came away with all W's and no injuries!  They hope to take this momentum into their final three tournaments of the 2019-2020 season.  These will all be played at the B-Level of competition.  It will not be easy in the first test at Buffalo with the White Hawks being short handed two players.

The 8th Grade Boys got back to some winning ways at the Tiger Paw Classic in Belle Plaine on December 15th.  This was the first B-Level Tournament the team has played in this season.  The results were affirmation that this team belongs at this level of play.  The rest of the season promises to be exciting.

Westonka first took down Shakopee 35-25, then held Mankato to 15 points in a 29-15 defensive blitz.  In the Championship game versus Waseca, the White Hawks fell short in a 48-29 game that was significantly closer than the final scores showed.  It was 20-24 at the half in part to Wyatt Specht's defense locking down the Blue Jays star player.

The general theme of the tournament was very strong team defense extended from EVERY player on the roster!  Carter Reinbold was a strong leader matching the level of play expected from a Co-Captain.
Scoring Leaders:  Carter 24, Wyatt 17, Jadon 15, Matt 12.